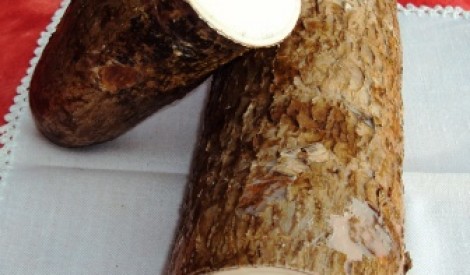 is widely consumed wherever it is cultivated in tropical regions. It has longitudinal form ; its flesh is firm and of whitish color, under a brown bark and skin. Cassavas can be cooked in various ways. Softly boiled, it has a delicate flavor and can replace boiled potatoes in many uses : as an accompaniment for meat dishes, or made into purées, dumpings, soups, stews, gravies, etc… Tô (Fufu) is made from the starchy cassava-root flour. Mostly consumed in Guinea as a simple vegetable for the rice’s sauces and also in stew. Otherwise, in the Haute Guinea particularly, the Cassava is consumed in the form of a flour (dried and reduced in powder) for the preparation of the tô. In Ivory Coast it, is consumed in the form of a couscous, the attiéké. The cassava’s leaves are consumed in sauce. See banankou fida